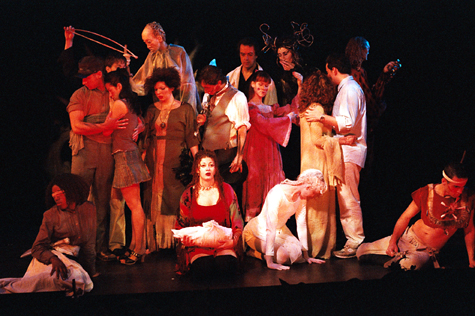 Winning “Best Music/Lyrics in the 2003 NY Int’l Fringe Festival, “Lost” is a Hansel and Gretel upgrade in which the fairy tale format is transplanted and twisted into a fresh new form, containing real American myths and ghost stories, intensely modern situations and dilemmas, and troubling meditations on the way children are treated in present American society.

Gabby and Hanlon, two teen-age siblings from the city, are abandoned by their father in the Great Smoky Mountains of Tennessee. They are then kidnapped by Mamba, an evil witch who farms children’s body parts to gain eternal life, and Laborius, her mad scientist husband. This evil twosome seduce the two terrified teens into a surreal secret hideaway where children from ages past live out their suspended lives bereft of the body parts they have lost to the organ-snatching Mamba. While there, Gabby and Hanlon each falls in love with a sad spirit, then make a failed attempt to escape through a forest of ax-wielding ghosts, only to at last be reconciled to going through the motions of preparing their organs for transplant (Gabby exercising to nurture her uterus and Hanlon studying to nurture his brain). However, after discovering that Mamba and Laborius are the last remaining remnants of the Lost Colony of Roanoke, Gabby and Hanlon finally break free by rousing the other children to revolt. At last they escape, still torn between their urge for home and their feelings of love and pity for the disembodied children.

The score for this musical, written by the late great Jessica Grace Wing, can be provided upon request.

This show requires at least 12 actors.

It was originally produced by Inverse Theater as part of the NY Int’l Fringe Festival. That production’s page is here.