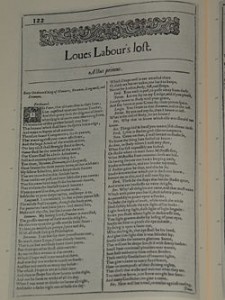 Tackling Shakespeare head-on, Bromley set out to match and beat the bard’s most verbally explosive and innovative play, Love’s Labour’s Lost, by writing this sequel, Lost Labors’ Loved, that takes place six months (and 400 years) after the Lords of Navarre have sworn themselves to celibacy. While this updated version brings a whole new host of characters and predicaments, it also contains a wide array of parallels at almost every level to the original. The ultimate audience and actor experience would be to do the two plays back-to-back (this has never been done).

The play requires as many actors as Love’s Labour’s Lost (approx. 12 with cross-casting).

The play was produced once at Nada, though little remains by way of memory.