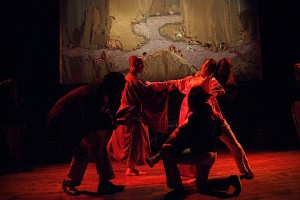 Here’s the Soho Think Tank’s blurb about this play:

When Kirk Wood Bromley set out to write a play about himself, the result was something other than a simple autobiography. Similar to Charlie Kaufman’s film ”Adaptation,” where the author set out to adapt a novel but ended up writing a film about a writer trying to adapt a novel, Me is a theatrical meditation on self-identity, where Bromley starts out looking to write a play about himself and takes detours through his personal relationship with his placenta, the recent extinction of the white river dolphin of the Yangtze in China, and just what exactly he means when he says, “I am the chosen fish, chosen by me / To save the planet from humanity.”

The myth of the origin of the white dolphin (a girl thrown into the Yangtze river because she refused to marry), discourses on definitions of self, and personal parental histories of the author all find their place in this swirling, humorous and challenging work. The play culminates with a live fish being brought on stage and the audience being asked to decide one question: should the fish be pulled from its tank and sacrificed for the play?

This play can be done by as few as 6 actors with cross-casting.

It was produced once by Inverse Theater at The Ohio Theater in NYC. That production’s page is here.

Some press quotes about this show:

“The most important new American play of the season.” – nytheatre.com

“Genius…as stimulating visually as it is intellectually…the banter, reflection, and fantasy in his text possess all the vitality and zaniness of 120 actors.” – backstage.com