On the Origin of Darwin 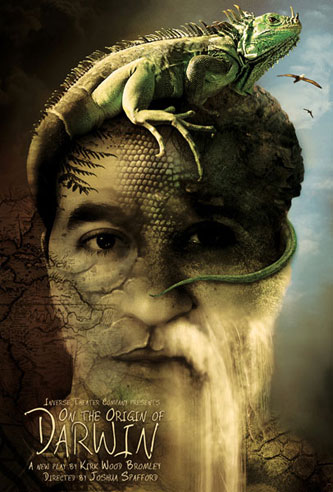 “On the Origin of Darwin” tells the story and discusses the issues surrounding the the Voyage of the Beagle, during which Charles Darwin sailed around the world and discovered the theory of evolution. The characters include an eager and sea-sick Charles Darwin, the strict and God-fearing Captain Fitzroy, historical figures John Henslow, Augustus Earle, Fanny Mostyn Owen and Emma Darwin, as well as gauchos (Spanish cowboys), Fuegians (native South Americans), restless sailors and the famed 13 Galapagos tortoises. Historical accounts of their ship life and travels, a chronological orientation of their journey and original excerpts from Darwin’s journals ground this piece in historical reality, while the storytelling both amuses and speculates as to the development of Darwin’s thoughts. At the center of this science-based play is Darwin’s personal struggle to identify the origin of species, and, by extension, the origin of humanity and all things human – morality, culture, and art. The full production will include songs, puppets, and aerial acrobatics.

The original score to the play’s five songs, written by Tony-Award winning composer Mark Hollmann (Urinetown) and John Gideon, can be provided upon request.

This play can be done with 8 actors with cross-casting.

It was produced once by Inverse Theater at The Connelly Theater in NYC. That production’s page is here.