To read one of my plays, email me at kirkwoodbromley [at] gmail [dot] com. 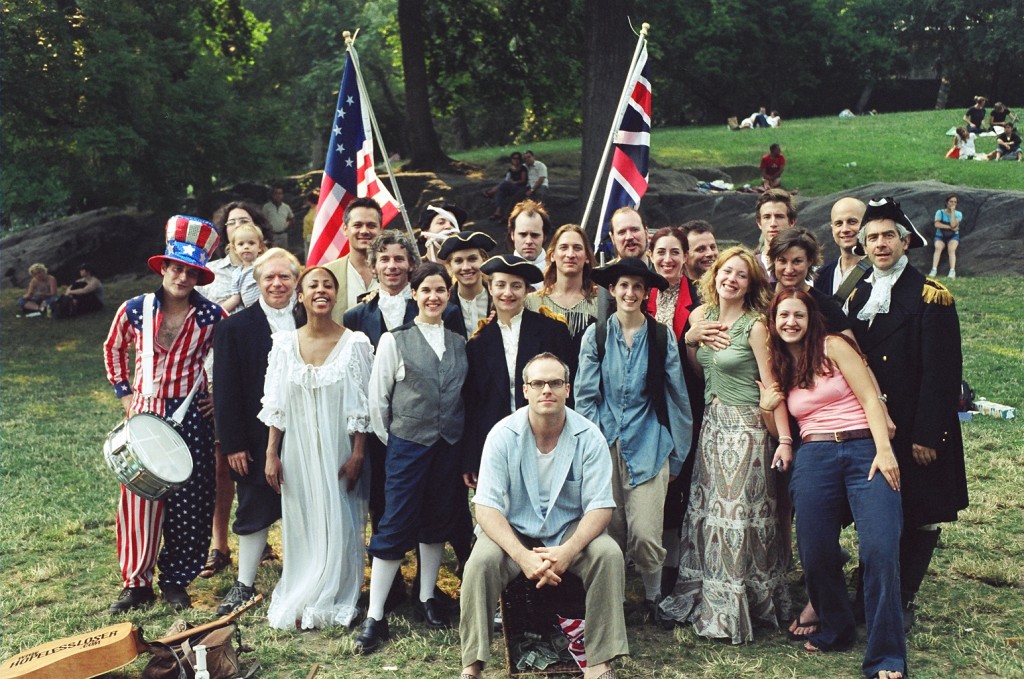 The cast and crew of Inverse Theater’s production of The American Revolution in Central Park. Executive Producer Chad Gracia front and center. I can be seen behind the Uncle Sam drummer with daughter, Fern, occluding most of my face.

“For at least a taste of what it must have been like to see Shakespeare in his own time,
you couldn’t do better than Kirk Wood Bromley.” – Joshua Tanzer, OffOffOff.com

“Bromley is rather a modern Shakespeare with all his poetry and intellectual ramblings, which, (in the play Remission),
well, kind of sound like what a genius might unstoppably spew forth if he were schizophrenic. Bromley’s
writing is basically Van Gogh’s fiery, brilliant, insane brush strokes.” – J Jordan, NYTheatre.com

“Extraordinary… brilliant…breathtaking…exhilarating…wherever he’s going, I intend to be there.” – Martin Denton, NYTheatre.com

“Some of the most crafted, interesting stuff in the New York theater…one of the few playwrights whose work can be considered literature.” – Robert Lopez, Tony-Award winning composer of Avenue Q and Book of Mormon

“One of the most intrepid, visionary playwrights working in New York today. His work should be produced.” – Greg Kotis, Tony Award-winning author of Urinetown

Kirk Wood Bromley wrote 25 original verse plays between 1990 and 2012. He may be the only living American playwright whose entire body of work is dedicated to theatrical verse. While he has been compared to Shakespeare (New York Magazine, Time Out NY, LA Weekly, OffOffOff.com, and the Cleveland Scene) and Stoppard (The Village Voice), his writing “speaks directly to its audience’s concerns and in its dialect” (American Theater Magazine, 1996).

Bromley has created plays in various genres. Upon his arrival in NYC he began writing the works that garnered comparisons to Shakespeare – All Must Be Admitted, The Death of Don Flagrante Delicto, The Burnt Woman of Harvard, Want’s Unwisht Work, Icarus and Aria, Lost Labor’s Loved, The Death of Griffin Hunter, The American Revolution, Midnight Brainwash Revival, and On the Origin of Darwin. Near the end of this phase, in 2002, he began creating shorter, small cast and solo plays (Syndrome, Remission, Three Dollar Bill, No More Pretending) as well as musicals (Lost, The Bangers’ Flopera), the latter in collaboration with composers Jessica Grace Wing (1971 – 2003) and John Gideon respectively. Since 2007 he has generated more experimental works (Me, Un(en)titled, When I Met Juliet, Cycatrix Adaptitude, Be Story Free, Dazl). In NYC, his plays have been produced by Todo Con Nada and Inverse Theater at The Village Vanguard, The Ohio Theater, Soho Rep, PS 122, Clemente Soto Velez, The Connelly, Theater Row Theaters, Nada, The Kraine, The Greenwich Street Playhouse, Access Theater, House of Candles, Nuyorican Poets Cafe, The Brick, Circle Rep, The Home Of, Central Park, Prospect Park, East River Park, and more. Outside NYC his plays have been produced by FoolsFury (SF), Sacred Fools (LA), Bad Epitaph (Cleveland), Arizona OnStage (Tucson), Los Angeles Community College, Wesleyan University, and Kenyon College.

For an overview of Bromley’s writing and career by one who knows him very well, go here.