The Death of Don Flagrante Delicto 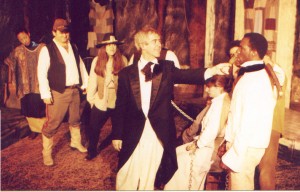 The time is 1865, and the Civil War has just ended. The place is a southern plantation near Lynchburg, Virginia, where slavery, brutality, and incest thrive. The master of this plantation, however, is Don Flagrante Delicto, an eccentric and maniacal genius who writes and directs fantastical plays which are performed by his family, slaves, and neighbors on a small stage behind the house.

Tonight’s performance is entitled “Aethelbert and Augustine,” the true story of the 600 AD conversion of the Anglo-Saxons to Christianity. The audience – a northern nurse, a southern soldier, and a freed slave – are chained to their seats. As the play-within-the-play unfolds, Don Flagrante, knowing his way of life has come to an end, roars about the stage, narrating the story, taunting the audience, and attempting to justify “the peculiar institution” before he poisons himself and his “family” in a mass suicide.

Part morality play, part nihilist rant, part slave revolt, “The Death of Don Flagrante Delicto, aka A Gesturology of Morals,” is certain to anger, enthuse, and entertain, as it breaks and re-builds every taboo on which America is founded.

This play requires at least 12 actors.

It was produced once by Inverse Theater at The Greenwich Street Theater in NYC. That production’s page is here.