When I Met Juliet / It Was A Setup 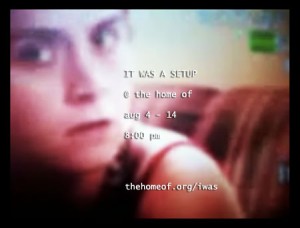 “When I Met Juliet / It Was A Setup” is two versions of one play. “When I Met Juliet” is the full length version for 6 or more actors, and “It Was A Setup” is a cut (90 minute) version for 3 actors. In its full or cut version it tells the story of a married writer who briefly meets a young woman named Juliet in a bar and ends up walking her home, which, despite his repeated attempts to see her again, is the last time they meet. As he grows increasingly frustrated with her failing to respond, his marriage begins to crumble and he ends up searching for her thru the Wild West, where he finally dies face-down in the desert after a bartender tells him that he’d seen her a few weeks before walk in with another man.

“When I Met Juliet” has never been produced, but “It Was A Setup” was produced once by Inverse Theater at The Home Of. That production’s page is here.